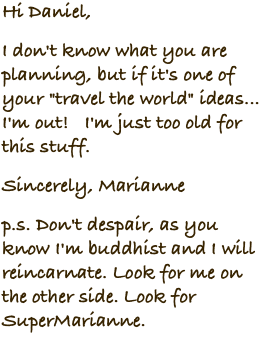 Many Riders, including me, think twice about taking a hi-tech bike when riding around the world. The chances of getting an older, simpler bike fixed in remote places are much better... but then again, don't older bikes break down more often?

I rode my '82 R80GS from Germany to New Zealand. But then my bike left me this note (on left). And now that I have Joey on her classic Beemer by my side, I thought I try the '07 1200GS and see how it compares. If push comes to shove, we can always come home two-up on the R80GS :)

We'll post here all the little hick-ups and problems we have with either bike and you can decide for yourself. 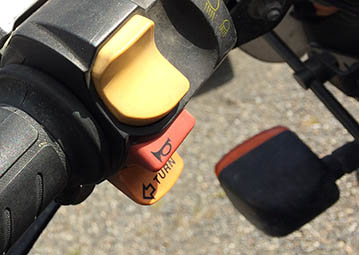 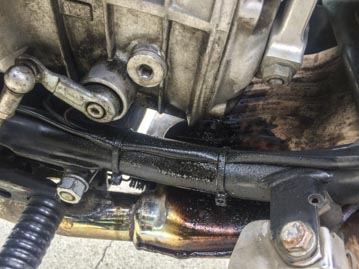 When the bikes arrived in Newark at the harbour the mirrors were missing :(   Grrr, you thieves. Cost us 100 dollars before we even started

The R80GS wouldn't run properly for the first 50 miles after it came off the ship. The exhaust spit white smoke, the throttle signals were totally ignored by the engine and we were worried something is really wrong. The shipping agency's personnel left the fuel tap open and the rocking of the boat must have caused the fuel to trickle past the carburettors into the cylinders... Eventually the bike behaved normally again.

Speedometer stopped working. Mainly because the previous owner tinkered with speedo cable, which hooked onto something when the handlebar was all the way to the left. It pulled the entire speedometer out of it's casing, but I could fix it. It's working again.

Yolanda doesn't run properly. She's down to 50% of the power. We don't know what it is. I checked the sparkplugs = light grey. I checked the oil-temp = 240 Celsius (super high). Hm, not enough fuel? I cleaned the carburettors, it doesn't improve it. Then Joey says the problem is most noticeably right after we fill up on gas. A lightbulb comes on in my head. I punch some holes in a cut-off bottom of a coke bottle and place it in between tankbag and tank. Yolanda runs like a dream again. The tankbag sealed the filling neck and the negative pressure kept the gas from trickeling down into the carburettors.

Yolanda gets a service by the friendly guys from BMW Ventura in California. Done was: sparkplugs, airfilter, valve-adjustment, engine oil, oil filter, gearbox oil, final drive oil, break fluid... something else? That's it I think.

For some reason, the left indicator stops working after if flashes a couple of times... weird

Yolanda's gearbox gives up. It's not what you think, it wasn't missing any oil. One day Joey notices vibrations at high speed in 5th gear. The next day, we hear rattlings sounds and can't get 5th gear in. Daniel hops on Yolanda, hoping the gearbox would not jam and slowly rides to the next town (Hazelton BC Canada). Joey follows on the Marianne. Both feel uneasy riding.

The generator gives up, Yolanda's headlight goes dim, the RPM meter goes low and the engines shuts off with a bang.

I make an oil and filter change on both bikes in Ron's garage. We met Ron randomly on Hatcher Pass, he invites us and offers his tools. Thank you Ron. I also find the heated grips problem and fix it, now that we're headed South again...

Marianne gets the front tire punctured. 20mins later, we're up and running again.

Marianne gets a new rear tire. The worn Heidenau K60 tire lasted me about 24000 km / 15000 miles. The front is still good for another while.

Marianne gets a new front tire. This time I'm trying the very popular Heidenau K60 - Continental TKC80 - combination. It works surprisingly well. Not sure if I would do it again though.

The glas of Marianne's rear mirror starts vibrating inside the plastic casing. Weird! With a couple of drops of Superglue, this is solved again.

I exchange my sidestand for a SIDEKICKER, which is one of the most useful pieces of equipment I had... ever. Love this thing. Check here for more info.

Yolanda's headlight turns off randomly until it stops working alltogether. Joey has to ride with the high-beam on all the time, because that's all that works now. I found out the lightswitch is causing the problems. It needs fixing.

We were invited to present at the BMW dealer in San Diego. The crowd loved what we had to say and so did the guys at BMW. They helped with a huge service that just needed to be done before we enter Central America, where it's harder to get parts. We did the following:

We realize, Yolanda's headlight is cracked. It must have taken a rock at high speed on the Dalton Highway. Not great without a headline guard.

The heated grips stop working, right on time for Alaska...

Marianne gets a service by the friendly guys from BMW Ventura in California. Done was: sparkplugs, airfilter, valve-adjustment, engine oil, oil filter, gearbox oil, final drive oil, break fluid. They also exchanged the fuel pump, which already showed cracks. But there was a recall by BMW on this item, and because the guys at BMW Ventura are super cool, they managed to include Marianne, so I didn't have to pay for that. Thanks Michael Spencer. 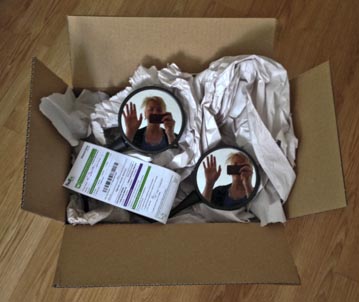 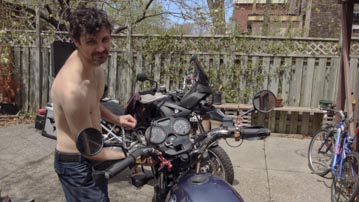 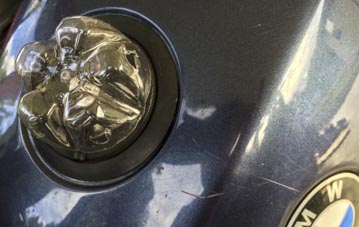 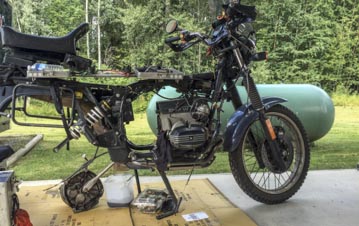 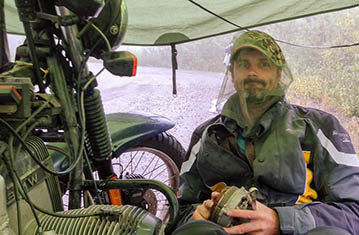 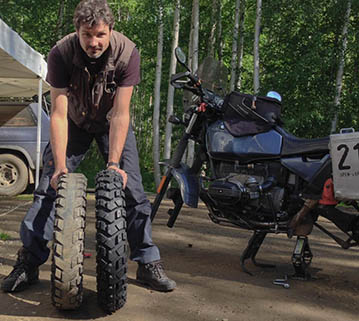 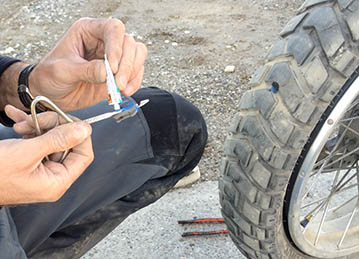 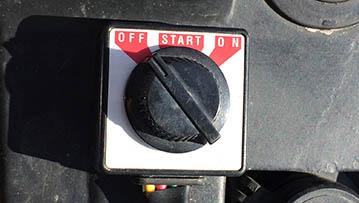 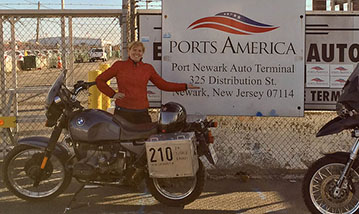 To our surprise we find 5 deep cracks in Yolandas rear tire. Not sure how they were caused. We would have continued on that tire with an inner tube in it, but a very good friend wouldn't let us and bought us a  brandnew one.

Before we left for the trip, we moved Yolanda's panniers a few inches further towards the front of the bike to get a better balance. We finally find out, that this interferes with the swingarm when it dives in all the way. We correct this by making a dent into the pannier.

It took us a while to find out what it was, but the speedo cable makes some noise at certain speeds.

The forkseal starts leaking. Later when I replace it I notice how the previous owner put one in the wrong way. It's been sitting on an angle.

Both bikes get new tires (Heidenau K60) for front and rear

Yolanda's front brake gave a "pumping" feedback to the handlebar-lever. We had the disc put on a lathe to smooth it out. This helped a little bit. Replacement needed soon.

The starter engine needed repair and because the problem has been going on for a while Yolanda needed a new battery too.

Engine oil and filter change for both bikes

The repair of the starter engine didn't last that long. This time the magnet came off the casing, dissintigrated and jammed the rotor. Luckily we found a magnet to replace the broken one. Yolanda really needs a new starter engine soon.

The brake light stopped working. The footpedal did not work the switch properly, we could fix it though.

The speedometer caught water from the heavy rains during rainy season in Central America and stopped working. Only the odometer is still going.

Through the travel community we had a stranger bring in parts from Europe and we could replace brake disc and starter engine in Barranquilla, Colombia.

Both bikes received a elaborate service, partly by BMW Colombia and partly by us. We traded a adventure presentation for a service. The guys at the dealership were groovy.

• replaced conventional lightbulbs with LED to save power consumption

• replaced oil pressure switch as it was leaking

Both bikes get new tires (Heidenau K60) for rear and front. Thanks to Heidenau and Harald at "Motorrad, Style & Tours" from Lima, Peru.

The battery has been weak for a while, this time the bike wouldn't start. We replaced the battery and were good to go again.

Both bikes got an extensive Service in Cape Town. We wanted to do everything possible to not end up working on the bikes further up in Africa, most likely under harsh circumstances...

Both bikes get new tires in Durban, SA

The extra (knobbly) tires we got send down to Durban, we could manage to send ahead of us for when we need them furhter up in Africa.

The charger plug's cable became lose, needed fixing. I also opened up and dried the cockpit as the instruments fogged up from the inside.

Daniel knocked Josie's bike over on a drive way and broke the windshield again. This time it could be fixed. Does not look pretty though.

I noticed how the valves on the right cylinder were very noisy. When I opened the cover I realized how lose one of the cylinder bolts were. I tightened it only to find that it came lose again after a short drive. The engine block's thread holding the bolt had given up. We needed to put in a heli coil.

When we put it back together again, we broke a piston ring  :(  Luckily we could find one from a car that fit.

I also replaced the head gaskets on both sides while I was at it.

Both bikes got new engine oil and filter

Both bikes got new engine oil and filter

I needed to tighten the fairing as Namibia's endless corregated gravel roads shook everything lose.

Both bikes get new tires in Brazzaville Congo. This time we put on knobbly Heidenau K75

Front indicator came lose after a crash on a sandy road. Luckily it could easily be fixed.

One pannier came off after a crash on a slippery muddy road in Gabon. This could also be fixed on the side of the road.

Most inconvenient breakdown so far. We were stuck in the painfully hot and muggy city for two weeks as Yolanda's battery wasn't charging. We had been riding with a spare battery since Luanda, Angola. I was charging one battery (sitting in my tankbag) off my bike, while Josie was draining the other one in her bike.

We speed-ordered a new diode plate as we diagnosed that was the problem. When it arrived and we put it in, the motor electric also gave up.

Luckily we could find a similar electric unit in Brazzaville and got the bike working again.

Engine oil and filter change for both bikes

In addition to new tires, superMarianne gets a larger 21inch front wheel, sponsored by  WoodysWheelWorks !! Thanks Woody. I can't tell you how much it has made a difference ever since. Especially in Africa. 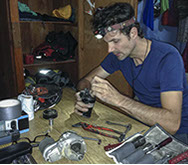 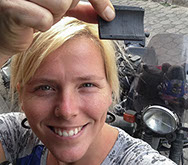 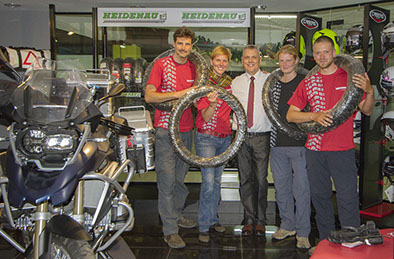